The point of networking

Recently I attended a networking skills workshop, run by Philippa. Philippa as always gave the workshop a great atmosphere and was inspiring and interesting to listen to. Her vast knowledge and experience in networking, as well as fun and uplifting personality, gave the workshop a wonderful and fresh vibe.

The workshop was focusing on understanding networking, gaining confidence in networking, making yourself memorable, how to handle referrals, and how to network around the event. These are all essential skills and pieces of information when it comes to networking, and Philippa ensured that we were getting the best and most effective knowledge.

As I'm still relatively new to networking, I assumed that there weren't many steps to networking. That it simply involved communicating with other people at the meetings. However, it takes time and there are so many things you can do to successfully network. But once you've got it down, you're good to go!

The thing that stuck with me most was making your 60 seconds memorable. It seemed like everyone in the rooms biggest problem was the 60 seconds, some were even afraid of having to give a 60-second speech. The workshop was a great opportunity to work together on creating a perfect 60-second speech. It meant that everyone could give their opinions on your speech and help you to improve upon it and tell you what they thought was effective. It also gave the opportunity to get used to giving your speech and making sure that it was efficient and time effective.

Another thing that I noticed, was that quite a few openly admitted that they were arriving in time for the meal, and leaving after, therefore not leaving time to network with the other members. It was made very clear that in order to make the most out of networking, you have to actually network. You are far more likely to get business by communicating and interacting with other members, than just giving your 60 seconds and leaving it at that.

Networking means different things to different people but the main thing that we could all agree on was that networking meant community, which we proved to ourselves with the amount of help and guidance we gave each other. Being a community that helps and guides each other, allows us all to grow and see each other grow. So not only are you left with a feeling of success, but with the knowledge that you've helped others achieve success.
CLICK HERE to find out more about the Networking Skills workshops. 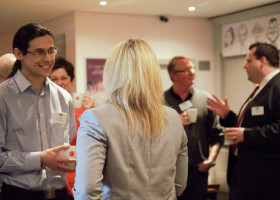