How strong is your inner shame game?

We all have that inner critic; that pattern of negative self-talk that can control us and define our actions…if we let it.

You know, the inner voice who constantly tells you that you’re not good enough, thin enough, clever enough, worthy of love, worthy of attention.  The voice that perpetually asks, “who do you think you are?” For most of us, that voice really has a lot to say.

But, how much better is a life built on our own terms?  One where the inner voice may still exist, but one where we know how and when to tell it to shut up?

Here are three ways that you can quieten your unsupported voice.

Keep a pen and paper handy and write down every unsupported thought you have in a day.  You’ll probably see the same one or a theme emerging.
Next, read the list back to yourself. Try and remember where this negative thought originated from – was it some throw-away remark someone made to you or even an event when you were a child? Or perhaps something you were told by a partner in a past relationship?

By identifying the source, you may be able to see that these thoughts are received, rather than perceived, i.e. they came from someone else.  If this is the case, then, rather than spending energy getting angry with that person or situation, spend some time understanding that their criticism of you is their problem, not yours.
We can only every control our own thoughts and actions, how someone else reacts is their problem!

This is a simple, but effective technique that relies upon listening to your intuition.  When you find yourself listening to that inner criticism, then ask yourself two questions:

1. “Is this the truth”?  If the answer is “no”, then you will know that this is just a negative thought, generated by fear. If the answer is “yes”, then ask the second question:
2. “Show me the evidence”.  In all likelihood, this is where that annoying inner voice will struggle to come up with concrete evidence.

This is such a simple technique, but powerful, nonetheless.

Instead of giving in to that inner critic’s voice, try to reframe your beliefs to something supportive instead.  An example of this might be where your inner voice tells you, “Sarah is so much better than me at X”, try reframing this to “Sarah’s strengths are x, but I excel at y and z”

Positive thought has a big role to play in this reframing.  Our brains are complex things and are constantly looking for evidence to bear out our thoughts.  Put simply, what the conscious side of our mind believes and accepts, our subconscious takes as an instruction and starts to manifest in our lives and bring that thought into our reality.

You can therefore see how easy it is for a subconscious to “latch on” to a negative belief and start to make that our reality!

These are three simple tips that will help you recognize negative thoughts not as reality but as your own perception of reality; and those two things are entirely different.

Practice identifying those negative thoughts, that inner critic and then controlling them.  You’ll find the voice becomes less strong and will be overtaken by a positive voice, which will become your biggest ally.

“Your Inner critic loves to tell you all the reasons you can’t.  You are powerful enough to NEVER need to explain the ONE reason you will: you’re YOU” 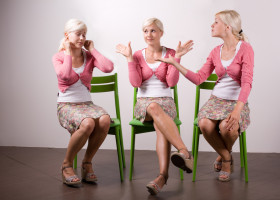